#1 in transfer to UC Berkeley 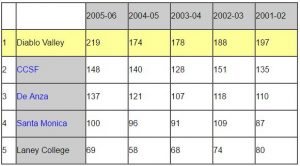 City Information
Diablo Valley College is located in the San Francisco Bay Area. The city of Pleasant Hill itself is 82% White Caucasian and has a median household income of $67,489, well over the national average. The city of San Francisco sits at the top of Northern California’s Bay Area peninsula, rimmed by the blue waters of the Pacific Ocean and the San Francisco Bay. The city is home to famous attractions such as its steep hills, cable cars, Chinatown, and Alcatraz Island. An important financial and international business center, the San Francisco Bay Area has a population of over 3 million. San Francisco is within close reach of the prestigious university towns of Berkeley and Stanford, ski resorts, and the beautiful Napa Valley wine region. San Francisco is cooled in the summer by ocean breezes and stays relatively warm in the winter. Summer temperatures average 18 degrees Celsius with a maximum of 24 degrees Celsius and winters are generally sunny, with average temperatures of 12 degrees Celsius. There is plenty of sunshine, with cool fog blanketing areas of the city in the summer. Students attending Diablo Valley College will fly into the San Francisco International Airport.

School Information
Diablo Valley College opened in 1958 and is located twenty miles east of UC Berkeley. DVC is not only recognized as one of California’s best community colleges, but it also leads the state in transfer to four-year institutions. Research figures recently released by UCLA’s Center for the Study of Community Colleges show that DVC’s transfer rate to four-year universities is 67 percent higher than the national average. Another report, released by the California Post-secondary Educational Commission, shows that DVC ranked number one in transfers in the state, ahead of all other California community colleges.