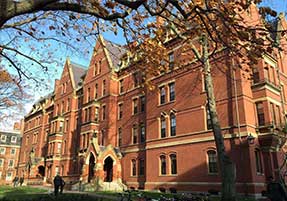 There are few words as universally recognizable as the name 『Harvard』.

But when Harvard was established in 1636, nobody knew its name .

Two years later, a minister by the name of John Harvard donated to the college 400 books and about ￡800– in today’s terms, slightly less than USD $100,000. Not a bad price for buying worldwide recognition, especially when you consider that Harvard’s endowment was worth $37 billion in 2008.

That must be why it’s so special, right?

Time and again, in survey after survey, it has been ranked the best university in the world. What makes it so special?

If you actually talk to Harvard students – and I encourage you to do so with the ones here, after our panel – they will tell you that, in many ways, Harvard is a school like any other.

Of course Harvard students are smart. The college receives 22,000 applicants per year and takes fewer than 1 in 10. You can bet that a fair share of these students are valedictorians, got perfect scores on their SATs, are sports stars, violin virtuosos and published authors, etc…

What really makes Harvard special is the passion and dedication each student brings with him or her.

Some students like to joke that there must be thousands of clubs and organizations on campus – one for every student. This is just a joke, but what it tells us is that if a Harvard student has an interest in an activity, he or she is willing to start a group for it.

But the point is that what makes Harvard students different is that they consistently TAKE ACTION. They organize events. They plan gatherings. They attend practice. They pour their time and energy into activities that inspire them.

It is only natural that this in turn makes them a source of inspiration as well.

Please join me in welcoming the students from the 2010 Harvard College in Asia Program.