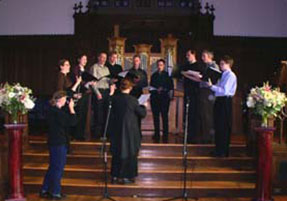 Oston continues to be exciting. Drew Gilpin Faust was inaugurated as the 28th and first female president of Harvard yesterday and I went to watch. Larry Summers was there (the students cheered loudly for him, but not as loudly as they did for Faust), as were a couple of other presidents emeriti and a bunch of other supposedly prestigious scholars.

The whole thing was very ceremonial - Faust, being a historian by training, emphasized the value of ceremony and ritual in marking events and encouraging reflection on the past and on the state of knowledge - and Summers and the other ex-presidents handed over a bunch of old documents and some silver keys.

It rained heavily for the first half hour and was cold and windy the rest of the time and some student musicians performed. That's all I remember - that and Faust's kind but very general inauguration speech, of course. Still, it's nice to be able to see Harvard from the point of view of someone who has an actual relationship with the school, rather than an awed or intimated visitor because it allows me to appreciate what is special about the school while still being able to see its faults.